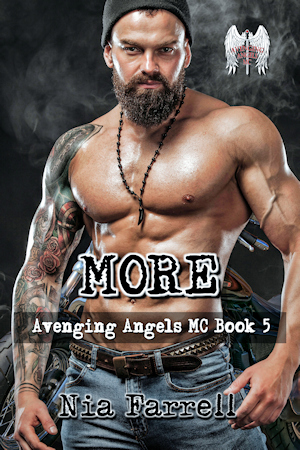 When Avenging Angels MC assassin Iceman is ordered to “take care of” a former employee who stole from the club, he has every intention of doing a clean, quick kill with no trace left behind. No one told him that Holly Webster is a young single mother with a sick child.  Learning that her three-year-old boy is the grandson of the club’s arch-rival Reaper, President of the Blackwater Demons, Iceman decides to keep Holly instead of killing her.

A Dominant like the rest of his club brothers, Iceman suddenly finds himself in a Master/slave relationship in the bedroom and the head of an instant family, complete with a dog.  He doesn’t like keeping secrets from his club but Holly and Zach are at risk until Reaper is found.  Can Iceman keep them safe or will Reaper find them first?

In the first truly dark romance of the series, the main characters’ relationship begins as forced compliance and shifts to fully consensual as Holly discovers the man behind the gun.  The story includes power exchange, a Master/slave relationship, adult situations, domestic discipline, potential triggers, and a guaranteed HEA.  Written for Ages 18+.

Remembering this morning’s fiasco, he’d kept an eye on Zach while his mother took a fast shower to wash away the smell of tuna.

Hers was bright. Flipping through pages, he recited books to his teddy bear from memory and entertained himself with games that she’d loaded on his reader. At one point, he’d brought his tablet over to Iceman, sat by his right arm, and studied his ink, fascinated by his stylized tribute to his favorite band, Guns and Roses.

Holly came back dressed in the same clothes but definitely smelling fresher. He realized that he’d forgotten to tell her to shave her box.

She slowed her steps when she saw his frown. “Is everything okay?” she asked hesitantly, afraid that one or both of them were in trouble.

“Yeah,” he said, scratching his chin. “I was gonna tell you to shave. Maybe tonight, once we get Little Bit here in bed.”

“Lidduw Bit?” This, from an affronted Zachariah. “I’m a big boy!” he declared, beating a tiny fist against his chest. “Mommy, teww him!”

“Zach, why don’t we ask Iceman where he came up with Little Bit? Maybe there’s a story.”

“There is,” he said, turning to her son. “This whole time your mommy was gone, anytime you asked me how long she’d be, what did I say?”

Zach stuck out his lower lip and furrowed his brow, trying to remember. “You said she’d be done in a lidduw bit.”

Iceman nodded. “In my club, everyone who joins gets a road name. But even prospects get called something.”

He nodded as if he understood, then stated, “I’m Zach and Mommy’s Lidduw Bit.”

He grinned unrepentantly at Holly. “You heard him. You’re Little Bit. But the boy here still needs a handle.”

Zach framed his face in his hands and thought about it hard.

“What does your mom call you,” Iceman asked him, “when she doesn’t call you Zachariah or Zach?”

“Big boy… and sweetie…” he said. Wrinkling his nose, he rejected that from consideration. “And bucko….”

Iceman slapped his denim-covered thigh. “Well, there we go. Little Bit and Bucko. Congratulations. You both got club names.”

Holly shook her head, amused by her son.

Tossing his reader onto the seat, Zach launched himself at Iceman, throwing his arms around his neck and hugging him fiercely.

At least it was a name that he could say, no r’s or l’s to struggle through. Chances were, the sounds would come with age and practice. If not, they’d have to check into getting him speech therapy.

He didn’t stutter, so he had that much going for him.