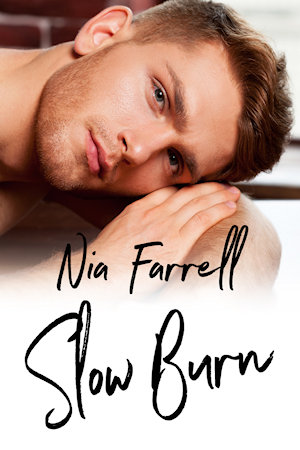 In a reverse Pygmalion story, a publicist is tasked with turning a debut novelist from geek to gorgeous.

Take an inexperienced geek. Add one seasoned divorcee. Throw them together in a haunted house, toss in a playroom, and watch the heat rise.

Nia has such a wonderful way of drawing her readers in, with thoughtful topics, incredible characters with spice and humour and a wicked way with painting pictures with her prose.’

“I’ve been thinking about what you’ve been tasked to accomplish,” he said smoothly.  “Prepare me for the book tour and the interviews that I’ll be doing.  I know my strengths and I know where I’m weakest.  I’m intelligent and articulate but I’m inexperienced in the lifestyle that I write about.  I want to change that.  Now that you’re here, I’m hoping that you’ll help me.”

Brooke sat perfectly still, warning herself to not jump to conclusions.  Her imagination was running wild.  She needed to rein it in.  Hear his thoughts before she said something that she shouldn’t.

“If I can honestly answer and say that I’ve done at least some of the kinks in Slow Burn, I’ll have the credibility that I’m lacking now.  And please, don’t point out that Agatha Christie never murdered anyone to write her stories.  We both know how brutal the press can be.”

Brooke felt her face flush pink.  She shifted in her seat and crossed her legs, pressing her thighs together to ease the sudden ache between them.  Holy shit.  The thought of him… of them… together…, doing the things that she’d dreamed of…

She realized that they were treading dangerous ground.  She was his personal assistant.  He needed a research assistant for kink.  If he wasn’t a Long Branch author, she’d be the first to volunteer.  But he was, and she couldn’t.

Not without putting her job—her career—in jeopardy.

She was already assigned to him.  Surely she could justify helping him research kink—

Assuming that’s what he was asking.

Maybe she was jumping the gun.  Maybe her imagination was taking her far from where he intended.  She wet her lips and swallowed before responding.  “What do you want from me, Sir?”

He nodded his approval at the honorific.  “I’ve been making connections online with people in the lifestyle who live in the St. Louis area.  Most of them are on the Missouri side of the river.  There are a couple of clubs, but I’d rather start with a private party.  Would you be willing to pose as my submissive?”

Brooke’s breath seized in her chest like an engine with a snapped timing chain.  What the fuck?!  She wanted to rewind, go back to where he asked her to pose as his submissive.  Why would she pimp for him when she was more than willing to take one for the team?

The transformation to a playroom had already begun.  A massive, modern four-poster bed dominated one wall.  The black metal uprights sported rings for bondage.  The mattress was covered in a fitted black leather sheet.  A bench traversed the foot of the bed.  The only other piece of furniture was an antique prie-dieu with a rosary draped over the devotional’s red velvet top and a paddle propped against its side.  The bottom cushion’s matching fabric was worn thin from kneeling.

“Now I’m curious.  Are you Catholic?” she asked.

“No.  Just kinky.”  He cracked a grin, looking at once sheepish and unapologetically naughty.  He reminded her of a parochial student caught studying graffiti on a public restroom wall.  “It seemed the right height for…”

His words trailed off.  She waited until she was certain that he wasn’t going to finish his thoughts.

She heard footsteps and looked to find him beside her.  Her nose was nearly even with his navel.

Rising to her feet, she stepped onto the kneeler and braced her hands on the padded top.

“I was right,” he rumbled, moving behind her.  His voice sounded rougher than normal.

“You were,” she breathed, gasping when he narrowed the distance between them.  He stopped close enough for her to feel the heat of his body without actually touching her.

And she wanted him to touch her, dammit.  They’d spent hours talking, getting to know each other.  She liked him.  Really liked him.  Remembering the last picture that his personal trainer had sent to her, she could envision him covered in sweat, locked in the throes of passion.

Slowly, deliberately, she backed into him, not stopping until her ass was pressed against the hard column of flesh behind his fly.

“Such a naughty girl,” he said, slapping her ass with his hand.  “Teasing me.”  He teased her back, rubbing his erection on her seam.  “I think you need to be spanked.”

She did need a spanking.  She’d been dating vanilla for too damn long.

“I do,” Brooke whispered.  “I do need a spanking, Sir.  I shouldn’t be so forward, but you have no idea what you do to me.  I’m buying batteries in bulk,” she confessed.  “If I’ve ever seemed in a hurry to wrap up a conversation, it’s so I could finish what you started.  Sometimes, I take the edge off before your call so I don’t squirm in my seat while we’re talking.”

She hoped that he would do his own audiobooks.  His voice was perfect for it.  Low.  Slightly rumbly.  That evocative soft Texas drawl became panty-melting when it was supercharged with the passion of his writing.  He sounded hot as fuck when he shared scenes from his current work in progress.  Feeding the Fire promised to be every bit as good as Slow Burn.  Just as sensual and full of suspense.  Another killer with a penchant for kink.

He smacked her ass again.  “With me,” he growled, “or you’ll be adding to your count.  Twenty to start, then we’ll see.”

“Take off your slacks, Brooke.  I want to see my marks on you.”

Oh, God.  They were really going to do this.

Brooke unhooked her waistband, opened the zipper, and pushed down her pants.  They fell to mid-calf, effectively hobbling her feet.

He pulled up the hem of her blouse.  Taking a step back, he looked at his handprint on her bottom—or the part that was exposed anyway.  Most of the heat was under her panties.  She’d thought about shucking them, too, but he hadn’t told her to take them off and she wasn’t sure that she wanted to add to the count.

He had probably never spanked anyone.  She didn’t know how hard or how easy he’d go with her.

“Count,” he ordered, sounding all Domly, “and thank me.”

“One, Sir,” she bleated, still feeling the sting of his palm on her ass.  “Thank you, Sir.”

He spanked her other cheek, making a matched set of marks.

The blows kept coming, raining down on her sorry ass until he’d thoroughly blistered her bottom.  She tried not to moan, but near the end, she could feel the start of a delicious disconnect.  The pain transmuted into pleasure.  She found herself arching back to meet his hand.

On the count of twenty, he squeezed her cheeks, making her whimper.  She felt him push two fingers along her crotch and press against her panties.

“You’re wet,” he murmured, his voice full of awe.  Regardless of the scenes that he’d written, he sounded surprised that he’d made her that way.

“Why not?” he asked.  New to this, he was naturally curious.

“Was it because I hadn’t given you permission?”

She nearly smiled at that.  “I haven’t been trained in orgasm control.  If you’d kept going and hit me just right, I probably would have climaxed.  My clit’s really sensitive.”

This, with his fingers sliding farther along her seam until he was pressing against her clitoris.

“Yes.  Not often, but I have before.  It usually takes my magic wand and my nipples being clamped or tormented to get me off that hard.”

“I’m not most men,” he reminded her, pressing against her pucker.  He pulled his hand away and stepped back, breaking contact and leaving her aching and needy.

“Jesus,” he breathed.  “I could almost come right now, just from seeing you like this.”

She looked over her shoulder at him and was singed by the heat in his eyes.

She wanted to come.  She wanted him to tie her to his bed and fuck her like an animal.  But a good submissive wouldn’t tell him that.

A good submissive would show him.