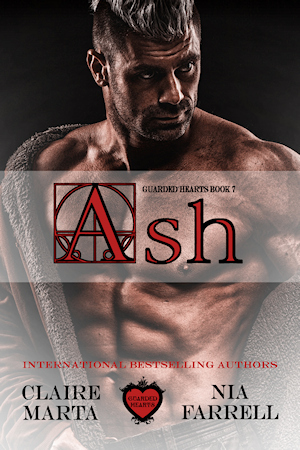 On the run from her mobster stepfather, Ashlee Gabrielli knows to trust no one. When Ash stumbles through the gates of the Citadel looking for a place to hide, she has no idea the men here are shifters.

Tobias Santini is the leader of The Order of the Phoenix. The cadre’s superior has guided his men and protected their women since the first fated mate was found. With everyone else in relationships, Tobias remains alone, serving as guardian to them all.

When he discovers Ash hiding in the garden, everything changes. She’s the image of a woman he loved and lost a lifetime ago, and she’s in trouble. Taking her under his wing, Tobias vows to protect her—even from himself when attraction sparks between them.

Ash is inexplicably drawn to the silver fox superior. Eventually, he reveals their past life connection, but he’s still keeping secrets. She has one, too, possessing a dangerous gift that no one foresees. With forces unfolding their insidious plans and a final showdown brewing, the men of the Citadel will need every ally they have to survive the wrath of the vampire Etienne. Yet even that might not be enough this time.

BOOKS IN GUARDED HEARTS SEASON ONE:

Tobias stared at the angel before him. Skin still flushed from her bath, she was a vision of beauty and so startlingly like his Francesca, he almost forgot she wasn’t.

“What?” Ash questioned, looking at him like he’d gone mad.

Catching himself, he realized he’d been staring like a besotted fool, moonstruck by this enigmatic young woman. Tobias cleared his throat. “Your hair,” he began.

“Your hair,” he began again. “Forgive me. I should have set out a brush and comb for you.”

Ash shrugged a slim shoulder. “I used a bunch of other stuff, but I didn’t see those where I looked.”

Tearing himself away, Tobias went to fetch a vintage silver set for her to use. Ash still had questions to answer. Demonstrating kindness was one way of putting her at ease. Show a bit of courtesy, some geniality, and she might lower her shields enough for him to ferret out the secrets she was keeping.

He found what he was looking for and brought them back to her. When she hesitantly reached to take them, he could smell the subtle scent of his favorite soap on her hair and skin. Why it pleased him, he wasn’t sure. He was desperate to know why she looked so much like the woman he had loved and lost. Coincidence? Or was something darker and more nefarious at play?

If she was working for their enemies, she could easily be a threat to his home.

He watched her go, quickly returning to the bathroom to brush her locks and bring order to the messy blonde mop.

He had planned to work on the carousel phoenix today, but he didn’t dare leave her alone. One unguarded moment and she just might disappear. Remembering the way the air had rippled around him when he’d caught her by the wall, Tobias frowned. He needed to know who she was..., what she was, and what powers she possessed.

Perhaps it was time to have Father Xavier over for a visit. The Shepherd was the acting head of the Guardians of the Sacred Light cell in the city. Although the secret organization had no real love for supernaturals, Xavier had many he called friends. If anyone could tell him what this woman was, it would be Xavier.

Tobias wondered if she was some kind of changeling or shapeshifter. That would explain why she had Francesca’s face. Perhaps she had picked up his thoughts, so heavy with the past lately, and used an image from his memories.

The sound of her voice dragged him from his musings. Ash was looking at him guardedly, her expression a mix of innocence and nervousness. His height alone had to be intimidating. He was a good fifteen inches taller and more than twice her weight. Tobias recalled her reaction when he’d grappled her to the ground. Remembering her fear, he felt a surge of protectiveness toward this tiny female who had come so unexpectedly under his care.

Whether she was his prisoner or his ward remained to be seen.

Ash straightened her spine. “Yes, we do. You know we do.”

Her virginity might have been stolen from her by the monster she’d lived with, but to Ash, this would be her first time. The one she would always remember. She’d chosen Tobias to give her the memory of what it should have been like. Something to treasure. The first man she’d truly been attracted to. Her choice. No one else's.

Ash knew she’d made the right decision from the way he kept talking to her. If she said stop, she knew in her heart he would.

Walking on her knees, she straddled his head and let the calloused hands on her hips guide her into place. She curled her fingers around the top of his headboard and hung on for the ride.

He licked her, a sinful stroke of his tongue that made her want to grind herself on his face and use it to get herself off like she’d used his fingers. He licked her again, shifted her, angled his head, and started fucking her with his tongue. Her small breasts swung with the motion, pelvis rocking against his hungry mouth. He feasted on her like a starving man before finding her clit and letting his finger fill the void he’d left behind.

A familiar tension built, holding her in its grip, refusing to let her go but not letting her find completion, either. She whimpered, feeling desperate and needy.

Hearing her, Tobias gave her clit one last lick, fastened his lips over it, and sucked it into his mouth. Working a second finger into her pussy, he banged her with his fingers, curled them, and drove her over the edge.

She’d never come so hard in her life. Juices shot out, wetting his face. Her spasming walls milked his hand, tightening around his digits like a Chinese finger trap.

“Sorry,” she apologized when he tried to pull out and her muscles clenched that much harder. “I guess my pussy doesn’t want to let you go.”

Embarrassed, she couldn’t meet his gaze. This was so different than what she’d experienced in the past. Better but at the same time she felt awkward and unsure. Tobias was older than she was. He wasn’t quite human but he had confidence that assured her he’d done things like this before. Ash pushed aside the twinge of jealousy. Tonight was her night. She wasn’t going to let thoughts of his other lovers spoil it.

He didn’t let that deter him. Instead, he started teasing her clit, toggling it with his tongue, drawing designs on it that helped her to open up to him. He fucked her with two fingers and worked in a third, jacking his hand in short forays that grew in strength and speed. When she was on the verge of coming again, he fucking lifted her by the waist, sat up with her, and lowered her onto his cock.

Four fingers might have been enough to stretch her out.

“Breathe, babygirl,” he murmured. “Take hold of me if you need to. Part your lips with the tip and find your opening and guide me in. Just like that. Christ.”

Thank goodness she was slick. It was all she could do to wedge the head of his erection inside her and slowly sink down onto it, inch by incredible inch. The man was huge. Huge. Her god of the forge was hung like a horse. It took forever to work her way down, rocking against him, gaining ground with every push.

She winced when he hit bottom.

“Ssh,” he crooned. “Just hold still. Let your body adjust. Don’t try to rush it. Everything will come in time.”

He started whispering lovetalk in an odd mix of Italian and Latin, telling her how beautiful she was, how brave she was, how lucky he was to have found her. Ash took it as all the things she imagined a man was supposed to say during sex. Not the insults and threats she’d endured at the hands of her stepfather.

But Tobias kept on, vowing to protect her, to cherish her. She knew this was different when he bent his head and kissed her breast and confessed he couldn’t wait to see their baby there.

Men didn’t talk babies. Not like he was talking.

She realized then that he wasn’t wearing a condom.

Oh, God. What was she thinking?

“It’s a bit soon for that, don’t you think?” she asked him nervously.

Tobias jerked back his head, shocked that she knew what he’d been saying.

“You’re not wearing a rubber,” she reminded him. “Promise me you won’t get me pregnant. I’m too young for that. I want to live a little before I think about having kids. Jesus, I’m barely more than a kid myself.”

Guilt washed over his features. “I don’t have condoms,” he confessed. “I haven’t needed them.”

He didn’t have lovers or hookups or whatever? How could that possibly be as good looking and fit as he was?

“You’re going to buy some,” she ordered. “If we’re going to keep doing this, I’m not taking chances. Meanwhile, can you control yourself enough to pull out to finish? I don’t care where, just as long as it’s not inside me.”

Flexing his hips and driving up into her, he wove his fingers into her hair and pressed their foreheads together, holding her close while they shared each labored breath. “I do. I can. I will,” he swore.

“Okay, then. I’m trusting you to take care of me.”

A native Brit, I live in Italy with my husband and daughter. When I am not writing and drinking copious amounts of tea, I enjoy taking photos of my adoptive country, trying to stay fit with running, reading amazing books, and being a stay-at-home mother.

Nia Farrell is a four-time Golden Flogger Finalist and a founding member of the Wicked Pens. Dubbed “The Queen of Steam”, she writes hot sex and happy endings under three pen names in multiple genres and subgenres.