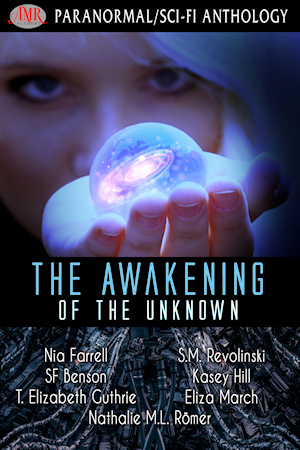 Awaken to the unknown with this paranormal/sci-fi anthology. An amazing group of authors have taken the theme and made it their own. Come, journey with them. Prepare to be amazed…. A month later, Leda is sick to the point of miscarrying. Divine intervention saves her, but she dreads the day that her husband King Tyndareus learns the truth. She’s actually pregnant with two sets of twins, one fathered by him and one by Zeus.
A divine swan. A god come down from the sky. Quadruplets who were born in eggs. There are truths to be found in myth and legend if you open your mind to the possibilities.
Sizzling erotic sci-fi romance, written for Ages 18+. >

Awaken to the unknown with this paranormal/sci-fi anthology.  An amazing group of authors have taken the theme and made it their own.  Come, journey with them.  Prepare to be amazed….

The Awakening of the Unknown anthology includes

IRRESISTIBLE – A RETELLING OF LEDA AND THE SWAN

The wounded swan landed on the bank with a thud to lie still and unmoving. Tears stung Leda’s eyes to see such a beautiful thing laid low. Injured, it was easy prey for hunters, animal or human. If it wasn’t already dead, the bird was doomed unless she could find a way to help it.

The swan’s head lifted and dropped. Relieved to see it, she released the breath that she’d been holding. It folded its wings against its body, adopting a protective pose. The blood on its back was plainly visible, but from this distance, she could not tell how deep its wounds went or what damage had been done.

She needed to be wise, though. This was a wild creature. The largest swan that she had ever seen was newly injured and in pain. If her intent to help was perceived as a threat, she could end up being hurt as well.

She started praying, silently chanting a hymn to Asclepius, petitioning the god of healing to guide her willing hands. When she walked out of the water, the swan turned its head and watched her approach with the same wariness that she was feeling.

“There, there,” she crooned, blanching when she saw how long the gashes looked. It’s a miracle that the bird wasn’t bleeding more. “Poor thing. I don’t know what I can do for you. We can try to find a place where you can stay until you’re strong enough to fly, but you’ll need to let me help you. Will you do that?

To make herself less intimidating, Leda folded her legs and crawled to a spot that was well in sight but out of reach. Easing down to sit, she hummed and talked and crooned to the bird, doing everything in her power to show that she meant it no harm.

She wished that her harpist was here. Music could be profoundly soothing, instilling a sense of peace and promoting tranquility. Inspired, she started singing. Hymns to the gods and goddesses. Popular ballads. Children’s lullabies.

Miraculously, the swan began to move, drawn by the music. It inched closer … and closer yet, until its chest was by her upturned toes. Hoping to get a good look at its wounds, she slowly, carefully parted her legs. Before she had a chance to lean closer, the swan worked its way higher.

It didn’t stop until its breast was pressed against her chest and its head was on her shoulder with its bill buried in her hair.

She held herself perfectly still, wondering at what her efforts had wrought. The creature seemed unafraid. More than that, it seemed to take comfort from her presence, seeking shelter and finding it. The bird nestled itself against her body, initiating contact.

Tentatively lifting her hand, she petted its long, elegant neck.

Confused by what she’d thought that she heard, Leda froze.

If she had any doubts, the swan sighed again.

It pushed against her, digging in with its feet to force her back until she was flat on the ground with its full weight on her body.

She swore that she heard it groan.

Panic gripped her heart and clawed at her chest, sharp as an eagle’s talons.

The words echoed in her mind. She lay, unmoving, aware that she was part of some great mystery that had yet to be revealed, may the gods protect her from harm.

We will. I swear it.

More words, heard as clearly as if they had fallen from human lips.

The meaning was clear enough. She was in the presence of the divine—or so he wanted her to believe.

The swan stretched over her. Its weight pressed down on her, increasingly so. Its body lengthened. Its neck grew shorter. Feathers disappeared, replaced by warm skin and magnificently sculpted, decidedly masculine muscles. He kept his head to the side, denying her the sight of his face. A pair of perfectly chiseled lips skimmed her throat, sending a bolt of sexual energy like lightning to her core.

“Close your eyes to be safe,” he rasped against her ear, his voice thick with arousal. Flexing his hips, he let her feel the strength of his desire. “Know that your prayers have been heard. I am here to answer them.”

But who was he? What was he—this man with wings who had fallen from the sky?

“No man,” he answered, reading her mind. “But you know that, don’t you? I have told you what I am. Heaven-sent and wounded in your service. Even gods bleed, Queen of Sparta. Kiss away my hurt and I shall grant your heart’s desire.”