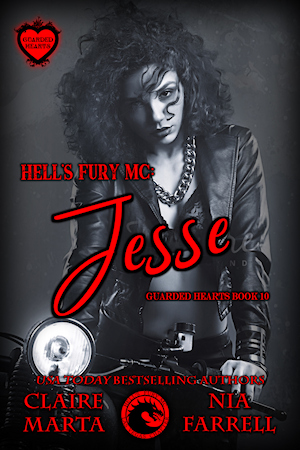 Jesse James has dedicated her life to helping shifter women who’ve been trafficked and abused. She never imagined becoming one of them. Kidnapped and drugged, the clouded leopard shifter finds herself spirited away to a mountain ranch that deals in more than horses. With little hope of escape, she fears she’s destined for the sex slave trade.

When news reaches the Hell’s Fury MC’s Las Vegas Chapter about a missing woman, Chaos and Wraith volunteer to help search. But things take an unexpected turn, and they end up as prisoners, too. Trapped in a nightmare, they not only discover their fated mate but find themselves auctioned off to the highest bidder with her.

Expecting to fight their way out, the three quickly learn that the ranch has a darker, even more insidious side. Thrown together, Jesse, Chaos, and Wraith must work as a team if they hope to get out alive.

The race is on, and the clock is ticking. Will they be able to claim the woman who’s meant for them, or will they die trying?

Crawling onto the bed, she lay flat on her back and clutched the sheet to anchor herself, blinking quickly but unable to stop the tears rolling down from the corners of her eyes.

There was silence for a beat, and then the side of the mattress dipped as Wraith sat beside her.

His gentle words only made her tears fall faster.  “I don’t want to—”

“I know.  I know....”  Leaning forward, he kissed the dampness from her cheeks, slowly working his way to her mouth.  Finding her lips, he brushed them with his in a sweet, tender kiss.

“Hush now.  Don’t look at the cameras,” he told her quietly.  “You can watch me, or close your eyes, but I swear I’ll make this good for you.”

Nodding, Jesse screwed her eyes shut, unable to stop the shivers racking her body.  Callused fingers brushed her hip, making her jump.  Caressing gently, they skimmed her stomach and arm as if he was trying to get her used to his hands on her body.

“You're so fucking beautiful,” Wraith murmured, his breath warm against the curve of her breast.  “Don’t be frightened, bean àlainn.  Don’t be shy.  You can touch me anywhere you want.”

Jesse wet her lips with her tongue and shook her head.  “Just get on with it.”

She wanted it over and done with so she could go back to her cell.  Maybe she’d be left alone then once the buyers had what they wanted—at least until she got shipped off.

“You deserve more,” he whispered.  “Better than this.  I’d take you to a cabin in the mountains, somewhere remote.  Secluded but with all the amenities.  A bottle of wine.  A roaring fire.  A hot tub on the deck where we’d drink champagne and eat strawberries by moonlight while snowflakes drifted down around us.  And when we came inside, I’d lay you on a rug in front of the hearth and treasure every inch of you....”