A conductor for the shifter underground railroad, Scout De Vries and a young orphan are kidnapped by members of the Death’s Head MC while en route from Idaho to Canada.

Scout and five-year-old Vivienne soon find themselves in a Louisiana ghost town at the mercy of the local MC’s President, Venom.  The jackals here are cruel and heartless, but she soon learns what motivates their actions.

Inferno and Smoke’s plans to celebrate Mardi Gras are turned upside down when news comes of missing shifters.  Aided by their brothers in the New Orleans cadre, they set out to rescue the abducted females.

Everything changes when Inferno is captured.  Finding himself in a cell next to Scout, the Hell’s Fury Vice President quickly realizes that she is his fated mate.

Smoke doesn’t give up hope of finding his brother-in-arms. As the rest of the gargoyles rally around him, the hunt is on.

With magic, danger, twists galore, and the secrets of the bayou all around them, it won’t be easy.  Especially when the enemy is determined to reclaim what’s been taken from them. 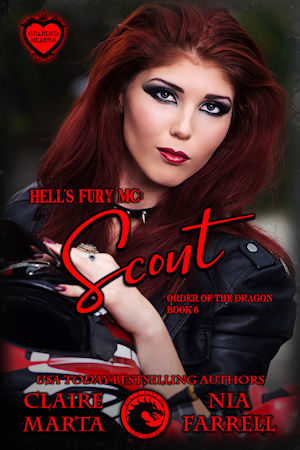 Scout sat against the cell wall, listening to the sounds beyond the bolted door.  Vivi was asleep beside her, huddled under the thin worn blanket one of their kidnappers had provided.  They’d been held captive for three days now, Day Four by her inner calendar.

A guard brought them meals on a tray, but they had seen no sign of their leader.  Scout had to wonder if this was a tactic to soften them up.  Keep them guessing at what would happen.  She hadn’t missed the male look of interest in the biker’s eyes every time he collected the tray.  It turned her stomach.

Through the metal bars of the window of their room, she had a clear view of the Louisiana ghost town, where jackal shifters wearing Death’s Head MC colors patrolled the empty streets.

To pass the time, she had been telling stories to Vivi, who was quiet and subdued.  It made Scout’s heart ache to see the little girl in distress.  She did her best to keep her distracted and her young mind off what might happen.

Footsteps coming from the corridor beyond the cell brought Scout’s thoughts back to awareness.  As the bolts of the door were drawn back, Vivi awoke.  Scrambling up, the child burrowed into her side, seeking protection.

Wrapping her arm around her small shoulders, Scout kept her close.

The door opened, and Tazz, one of the bikers, appeared in the doorway carrying a tray while his twin, Jazz, held it open.  Identical in appearance, they were both smirking.

“Breakfast time,” Tazz announced in a Cajun drawl.  “Better eat up.  The Prez is due.”

Scout’s stomach clenched at the news.  “Please, just let us go.  Can’t you see how frightened my daughter is?  What if she was your little sister or child?  Would you want to see her so scared?”

The jackal shifter laughed.  “She ain’t yours.  We’ve been looking for her.  Venom gave us all a photo to find her.  She got stolen from the cargo that was coming to us with some other merchandise.”

“Which makes us wonder how a pretty thing like you got her,” Jazz spoke up from the doorway.

Scout kept her expression bland.  Did they know she was a conductor with the railway getting the captive shifters out of danger?  It could threaten everything they had worked to keep safe.

Tazz placed the tray on the floor by her feet.  “Venom will get the answers out of you once he’s had his fun with his toy.  It’s been a long week, and he’ll want to work off his frustration.”

Jazz chuckled.  “The whore doesn’t say a word anymore.  He used to squeal like a stuck pig, but now he knows his place.”

The two jackals backed away and locked up, leaving them with the two bowls of oatmeal and bottles of water.  It wasn’t much, but it would fill their bellies.

“Hey, sweetie, are you hungry?” Scout crooned, brushing back a wisp of Vivi’s blonde hair.

“Yes,” the child whispered, peeking up at her.

She wasn’t a religious person, but she considered herself a spiritual warrior, battling evil and defending those who couldn’t protect themselves.  For Vivi’s sake, she drew from memories of her own childhood when her mother insisted on saying grace before every meal.

Vivi folded her hands and closed her eyes.  Scout focused on the tray but watched for movement in her peripheral vision, keeping tabs on the jackals she knew better than to trust.

“Thank you for this food,” she began.  “May it nourish our bodies and help us to stay strong.  Amen.”

Not knowing how Vivi had been raised, she made the blessing generic without naming any deity—male, female, or otherwise.

The little girl took her plastic spoon and dug in.  Scout did the same, finishing her oatmeal and swishing water to help clean her teeth.  She’d gone to sleep the last three nights with grungy teeth.  What she wouldn’t give for a toothbrush and paste right now.  Just a toothbrush would be a blessing.  Oatmeal was pasty, but the peanut butter sandwiches they served for lunch and supper were super sticky, coating every inch of her mouth.

They put their bowls and plastic spoons on the tray, knowing the jackals counted what came in and what went out.  Two bowls, two spoons, two bottles of water.

Thankfully, they let them keep the water to finish and left another three bottles by the door.  Left with nothing but time to fill, Scout asked Vivi if there was a story she wanted to hear.

“Do you know Snow White and the Seven Dwarves?”  the child asked hopefully.

“I do,” Scout told her, figuring she’d seen the classic Disney version like every other child on the planet.

But not Vivi.  The first time Scout started counting off the dwarves, Vivi scrunched her face in disapproval.

“That’s not how it goes!” she scolded.  “Mica’s the leader.  And there’s Rocky, and Brick, and Woody, and Jasper, and Flint, and Salty.  Salty’s the cook!  He doesn’t like that someone’s been in his kitchen and eaten his bread.  They search the cottage and find her sleeping across three of their little beds!”

“Really?”  Her curiosity aroused, Scout was eager to hear Vivi’s version of the story.  It sounded like something hippies or Rainbow People would tell their kids.  But her true excitement came from Vivi actually talking.  It’s the most words she’d strung together since they’d met.  “I’m sorry.  I don’t know your dwarves.  Can you tell what happens after they find her?”

It was a minor miracle, the way the little girl opened up, guarded at first but growing more comfortable as the story unfolded.  By the time Vivi finished, she was speaking freely, without hesitation, her expression animated, but her body language relaxed.

The guards had finally come down.  Scout didn’t want to push things, but she hoped Vivi would start opening up and sharing more with her.  Maybe she’d finally learn who this bright child really was, where she’d come from, and what she would eventually be.

Guarded Hearts Order of the Dragon Series at Amazon http://mybook.to/GHDragonsSeries