Her magical characters deal with day-to-day problems, just like everyone else. Usually in an ordinary way. Often with the help of their unique gifts. She's written about psychics, shape-shifting falcons, witches, wizards, and time travelers.

Oh, and at least one snarky, talking feline in every book. 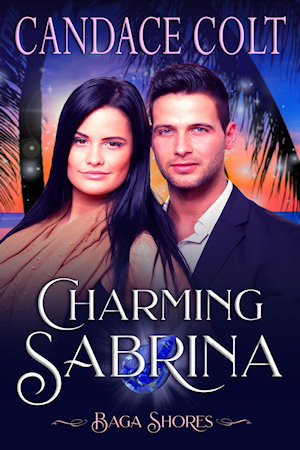 Haunted by her dark past, Sabrina de Malnati tightly guards her privacy and her heart. On her own since she was seventeen, she’s survived on street smarts and her magical Draiocht gift. The longest she’s stayed anywhere is in Baga Shores, a quaint beach town on Florida’s west coast.

Strait-laced civil engineer Colton James was a rising star in an international firm. Jobless after an economic downturn, he follows his dream to open a brewery in Baga Shores. An Ordinary with no understanding of the magical world, he decides an abandoned gas station full of legends and secrets is the perfect location.

CHARMING SABRINA is the second book in the Baga Shores Romance Series and is perfect for fans of feel-good, sweet romance stories, lovable magical characters, and enchanting small towns. 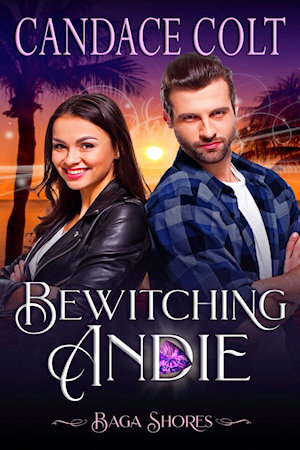 Single mom Andie McCraig couldn’t buy a spell if it was free. It’s bad enough she’s the only witch in the family whose potions turn to vinegar. When her son courts danger by flaunting his emerging Draiocht gift, she has no other choice to protect him: fight magic with magic. But she can’t do this alone. She comes home to Baga Shores to find a mentor to help her boy understand magic is not a game. Nowhere on her list of candidates is Brett Austin, a roguish Draio with a past—and an unforgettable smile.

Brett, who minored in business and majored in beach, renounced his gift after he couldn’t prevent a good friend’s death. Since then, he’s cultivated a solitary life into an art form. He’s nobody’s role model and intends to stay that way. Yet the quiet boy charms him—and Brett’s grown-up childhood friend Andie is too irresistible to ignore.

BEWITCHING ANDIE is the first book in the Baga Shores Romance Series and is perfect for fans of feel-good, sweet romance stories, lovable magical characters, and enchanting small towns.

In 1943, a World War II bomber on a training mission crashed in a marsh near Cat's Paw Cove. According to local legend, on every Winter Solstice, mysterious lights appear near the crash site. If budding photojournalist Casey Blessing can dig a story out of this myth, it could be the career boost she needs. But she can't do it alone. She partners with Thomas Hudson who claims to be an aviation historian. Casey is attracted to the enigmatic stranger, but his uncanny knowledge of the crash can't be just coincidence. Could she be falling in love with a ghost?