Randy Gauthier hails from the UK. He has always loved the magical world of sci-fi. Along with his passionate love of history, time travel had to be included in his storytelling.

His advice to aspiring authors: Keep writing, I once saw an article with Stephen King and he mentioned that you need to write at least 2000 words a day to become a good writer. So keep writing! 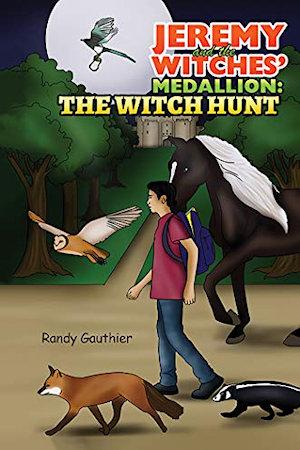 A present day teenage boy from London, England received a family heirloom from his mom only to see a magpie bird steal and fly off with it.

Jeremy was transported back in time to the seventeeth century where he embarked on a magical journey throughout England, Wales, and Scotland. He discovered his abilities were endless as he was became friends with a variety of animals. Learning to communicate with them, a strong bond was formed and the pack decided to accompany Jeremy and help him retrieve the family heirloom.

Jeremy and the Witches' Medallion will take its readers back to medieval England during one of the most well-known witch-hunts in history. While combining modern day narrative and medieval times, there is magic, witchcraft, talking animals and English history to take a reader on a thrilling adventure that they will never forget.

Purchase Jeremy and the Witches' Medallion

Jeremy and the Witches' Medallion Ebook

Jeremy and the Witches’ Medallion

Jeremy receives an old family heirloom, a medallion of uncounted age that is promptly absconded away by a magpie. The magpie flies away from the window and leaves a single feather. Jeremy not happy with the theft promptly chases after the magpie, discovering in the meanwhile that the feather when it touches his skin transports him and the magpie back to the 1600's, the days of King James and his pursuit of witches.

A chase and the beginning of a trek follow. The magpie burdened by the heavy medallion must fly to a certain destination to use it. Jeremy is steps behind and loses her, only to find that he can rely on the feather to whisk him closer to the bird he has named Maggie.

He also finds he can communicate with animals. Jeremy meets Dudley, a grand horse from the royal guard, and then a badger. Mrs. Fitzy, with Dudley's help, travel in pursuit of the medallion and more animals join the trek.

Maggie later finds the meddlesome boy is somehow blocking her transformation with use of the medallion because of his possession of her feather.

The story begins with a look back into the King James era and surrounding history with his persecution of witches. The author relies on actual history in his world building.

The reader will go through a few chapters of back-story before meeting Jeremy. There are some legal proceedings to get through that slow the story but when the reader gets past this and the story takes off. It will be worth the wait.