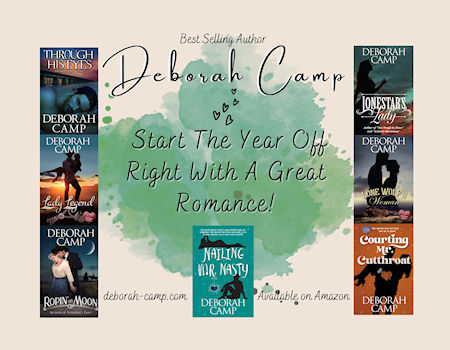 Author of more than 50 novels, Deborah lives in Oklahoma. She has been a full-time writer since she graduated from the University of Tulsa. Deborah's first novel was published in the late 1970s and her books have been published by Jove, New American Library, Harlequin, Silhouette, and Avon. She has been inducted into the Oklahoma Authors Hall of Fame and she is a charter member of the Romance Writers of America. She is also a member of the Author's Guild.

Deborah likes to write about strong, independent women and the men who are their equals.

I love to read and write about romance. Period. I’m a sucker for it.

My heroes usually are Alphas with a good sense of humor. They might seem rough and tumble on the outside, but they are soft and gooey on the inside – especially when it comes to the heroine. I love a good bad boy, too. Personally, I don’t think there is a sexier male on the planet than a bad boy with a heart of gold.

My new book is The Chosen One and I’m super excited about it! First of all, I loved writing it. It was so much fun! I fell hard for the hero – Alexander Grant. He’s one of those guys who has a reputation for being a bit of a prick, but he’s actually a nice guy. Handsome as sin with a British accent – I mean, how can you resist? I sure couldn’t! Therefore, can we blame Olivia Barnes for going along with his crazy “pretend we’re engaged” gambit? Don’t you love a “convenient/fake engagement” plot? I do, but I don’t write them often because I’ve had trouble plotting one that I believed. Until this one! I jumped right into this one and it practically wrote itself while I sat back and enjoyed the heck out of these two fun, sexy characters. Alexander and Olivia will win your heart and make you giggle, too. Or I sure hope they do!

My favorite quote is “Don’t wait for your ship to come in. Swim for it!” That’s what I’ve done my whole writing career. I’ve been treading water like crazy. Haven’t reached that darned ship yet, but I’m still trying.

I would be in a small town in Kansas. That’s where the book I’m writing now is set. It’s a contemporary romance about a guy whose ship did come in, but he sank in booze and drugs. Finally getting clean and sober, he’s in Kansas seeing to his recently deceased mother’s house full of stuff she bought from the shopping network as he deals with finding his way back to his old self.

The heroine is helping him clean out the house and helping him restore his faith in himself and his talent. He’s an Academy Award nominee scriptwriter. I like this made-up town in Kansas. Makes me think of Mayberry and the little towns in Missouri where my parents were from and where I was born. I like those places where, if you have a flat tire, you can knock on the first door you come to and it will be someone you either know, dated, married, or are related to in some way.

I don’t do this, but I do have “life lessons” in every book I write. I deal with social ills through my characters and have them learn important truths that will make them better humans. I try not to “preach” but just illustrate and let the reader either grasp the meaning or not

This is an interesting question. As a writer, I know I should enter that portal. But as a scaredy cat, I wouldn’t. With my luck, it would be a hell hole of some sort!

Love/sex scenes and kissing scenes are the most difficult. They are also the most fun. So, figure that one out. I think because I’ve written so many of them, I feel that I must find new and interesting ways to say things in those scenes. Also, I’m always trying to make my readers “feel” the kiss and every other sensation. If readers aren’t turned on by a kiss scene or a sex scene, I know I have failed miserably.

It’s also important to show characterization in those scenes. They need to be unique to the characters I’ve created. If I could plug into a sex scene a hero or heroine from another book I’ve written and they’d fit, I know I haven’t done my job as a storyteller.

Love scenes should be revealing and enlightening. The reader should come away from those scenes knowing more about the characters and what makes them tick, what scares them, what turns them on, what stopped them from doing more than just kissing. They need to have a glimpse of their souls in those scenes. That’s why they’re difficult and challenging and interesting to write. When I’m working my way toward such a scene, I give it a lot of thought and then I make sure I’m in the right frame of mind before I tackle it. I need to be in a good mood and have plenty of time to write. I don’t want to be interrupted. Sometimes I listen to certain songs to be me more in the mood, but most of the time I just dive right in and get lost in the scene.

No. No traveling for me.

I’m a former reporter and I think being nosy has been an asset for me. The other day, I was thinking how strange it is that people aren’t as curious about other people as I am. For example, I rarely know someone for long before I ask them how they met their significant other. I love these revelations!

However, I can count on one hand how many people have ever asked me that question. A couple of my close friends have even called me out for “grilling people with questions.” I don’t mean to be rude. I’m just fascinated by people and I love to hear about who they love, why they fell in love, why they fell out of love, who they regret not shagging, etc.

Writers should be interested in other people, don’t you think? How can we create characters if we know only a few in our lives? Although I’m not a social person – I’m the kind that stands in a corner at parties and wishes I was home with a good book – I do love to “people watch.”

When I was a teenager, I used to go with a friend to the airport and watch arrivals because I loved watching people hug and cry and laugh and kiss each other hello. I especially liked watching the crew leave the planes because I imagined where they must have been – Paris? Rome? Athens? And, of course, I’d imagine the love affairs they would be having. I’ve dreamed up quite a few romance plots at airports.